Why the real Ethereum killer might just be Bitcoin

Bitcoin is the most secure blockchain, and Ethereum’s proof-of-stake move will expose it to more security risks, writes Jagdeep Sidhu of Syscoin Network.

We’re finally here. After eight years of talking about it, Ethereum 2.0 seem just about ready to come to fruition.

Now that the Ethereum Merge is almost here, we can start thinking about what the world looks like post-Merge. Most at this point believe that although Ethereum is still the 800-pound gorilla when it comes to smart contracts and composable Web 3.0 functionality, the future of blockchain-based connectivity will be based on multiple chains.

That, of course, leads to the next big question: specifically, which of these Ethereum Virtual Machine-based protocols represents the most secure, scalable substrate for Web3 applications? But the entire discussion around Ethereum and these so-called Ethereum killers tends to leave out the oldest, most secure base layer ever created: Bitcoin.

There is actually a good reason no one is talking about Bitcoin. Simply put, there is nothing to talk about. There are no news stories about Bitcoin hacks. No articles about centralized authorities hijacking the consensus process for nefarious purposes. None of the tales of hundreds of millions of dollars lost to exposed vulnerabilities in the architecture that have so captivated the crypto trades.

Because none of those things happens with Bitcoin. Bitcoin just works. That’s why Bitcoin just might be the real Ethereum Killer.

To be clear, the absence of stories of successful attacks against Bitcoin does not mean that bad actors are not trying. Rather, it reflects the distinct advantages that Bitcoin has over the alternatives. To start, with over 174 million Bitcoin addresses with economically relevant balances, and over 14,000 reachable nodes participating in consensus, Bitcoin is by far the most decentralized blockchain in existence. As a result, Bitcoin’s base layer for settlement offers the most secure protection even in the face of externalities like nation stack attacks, war and hyperinflation.

Probably the biggest fundamental difference in the new Ethereum as compared to the current version is the shift from a proof-of-work (PoW) consensus to proof-of-stake (PoS). It’s true, PoW has its downsides, which have been well-documented. The mining competition that validates each block is energy-intensive with miners all doing the same work. Further, as the arms race accelerates, Bitcoin mining is no longer the province of the proverbial lone wolves with their laptops, but reserved for large, even public, companies, with warehouses filled with specialized servers. Arguably, this concentrates network power and rewards among a few node operators. The most ardent opponents of PoW would even say that the end result of this concentration of power is a centralized network — the exact opposite of what blockchain strives for.

And PoS has some benefits. It is likely better for the environment because miners are not wasting energy competing. Instead, in a PoS consensus, each potential miner sets aside or “stakes” some tokens as collateral. The network chooses among stakers randomly with those who stake the most tokens having the best chance of being chosen — and earning the mining reward. There is no contest and no wasted energy. Also, unlike in BTC, when the mining reward occurs simultaneously with the miner creating the block, with PoS, the reward is delayed as the rest of the network validates the block — allowing the network to penalize (or “slash”) bad actors by confiscating all or a portion of their staked tokens.

However, with all the enthusiasm among the environmentalists for a more energy-efficient solution, perhaps the most important criteria for building a decentralized data structure is lost. Switching from PoW to PoS adds significant complexity. The rules that govern the process don’t just happen. For example, network governance has to determine what level of collateral is required to stake and what the slashing penalties will be. Likewise, it must be determined how long the challenge period will be before a block is accepted. Making these decisions is not always straightforward. Higher minimums and penalties for bad blocks offer strong incentives for good behavior, but they also narrow the field of participants, which potentially leads to a more centralized and less secure structure. Conversely, lower requirements can be unhelpful as well.

At the end of the day, the proof is in the pudding. Bitcoin’s PoW protocol has yet to be successfully attacked. That represents a more than 10-year history of successfully managing state without corruption. A quick check of the news in the past few weeks shows that not to be the case with PoS protocols.

Of course, Ethereum’s killer use case is not the same as what we have seen traditionally for Bitcoin. Ethereum is seen as serving its greatest purpose as a decentralized base layer managing state commits for the next generation of networked applications. But that recalls the question we began with. If Bitcoin is the most secure of all the base layers, why is it absent from this discussion? The answer is that the conversation is evolving.

With players pushing forward with EVM-enabled protocols leveraging the unrivaled security of Bitcoin as a data layer for next-generation decentralized applications, the benefits of that approach are becoming clearer every day. In the near future, we may find that the best solution to the Web3 conundrum has been with us all along in Bitcoin’s proven framework. 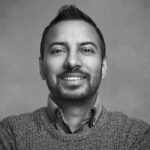 Jagdeep Sidhu is the Vancouver-based lead developer and president of Syscoin, a layer-1 proof-of-work blockchain and cryptocurrency. He has more than 25 years experience in software development and more than 20 years working in financial markets. Prior to Syscoin, Jag was a senior software engineer for Alpha Technologies.

Weekly Market Wrap: Bitcoin rebounds above US$18,000, Ether gains over 13%

A year to remember, a year to forget: Crypto highs and lows of 2022

14 years on, why Bitcoin will survive its growing pains