Why Bitcoin is still a good investment despite the bear market

BTC remains a safe haven for investors for the long term amid this year’s soaring inflation and market volatility, writes Josef Tětek of SatoshiLabs.

For savers looking to protect or even increase their reserves, these are troubling times as uncertainty and volatility stalk both the fiat and crypto economies. In the world of fiat, we have soaring inflation and the threat of recession. The crypto sector has seen the viability of high-profile stablecoins called into question as the value of Bitcoin has plunged. But despite current market travails, Bitcoin still offers individuals the best way of preserving their funds over the long term — as long as they themselves have custody.

Let’s consider the fiat economy first. Inflation in the Eurozone in May hit a record high of 8.1% while the United States registered a 40-year high of 8.6%. Having avoided the high levels of inflation seen elsewhere, Asia Pacific is, unfortunately, starting to catch up. Figures from APEC noted that the region’s inflation increased sharply to an average of 4.5% between January and March 2022.

What is the root cause of this inflation? Rising food prices, increasing fuel costs and supply chain bottlenecks all have a role to play, and it will likely get worse as the war in Ukraine rumbles on and Covid-19 continues to have an impact. However, these are short-term forces that will prove transitory. The true cause of inflation is in fact the monetary policy decisions of central bankers worldwide. With things only set to get worse, ordinary people everywhere will be looking for ways to protect their hard-won savings from the ravages of inflation.

Despite its current slump in value, Bitcoin could well be the answer — not as a speculative investment, but as a prudential way to save.

To understand the inflation we’re experiencing today in fiat economies, we must journey back to the Great Recession of 2008. At that time, central bankers’ greatest fear was that the financial crisis would result in a deflationary spiral. Monetary policy since then has been to incite inflation, largely through the printing of money (so-called quantitative easing) and keeping interest rates near zero. Steep inflation across the globe shows that after 13 years the bankers have finally achieved their goal.

However, now that the genie is well and truly out of the bottle, bringing inflation under control will not be easy. Perhaps the greatest sign that central banks are beginning to realize that they have bitten off more than they can chew is that they have shifted the goal posts with regards to their own mandates.

For decades, the principal mandate for central banks has been to maintain price stability. In general, that has meant working to keep the annual rate of inflation stable at around 2%. However, over the past two years both the European Central Bank (ECB) and the Federal Reserve (FED) have changed their stances towards inflation targets.

The Fed now uses a strategy called flexible average inflation targeting (FAIT), where it aims to average inflation at 2% over a certain time frame (although the time frame is not defined). Under this approach, its current inflation rate of around 8% is absolutely fine, because on a long enough time frame, it could eventually average out at 2%. Clearly, true price stability is no longer a goal.

The ECB, on the other hand, hasn’t changed the definition of its mandate so much as ignored it.

Until recently, it has pursued policies that have served only to exacerbate inflation with interest rates below zero percent, which led to more money being injected into the economy and yet more inflation. The newly-announced interest rate hikes may be a case of closing the stable doors long after the horses have bolted. It’s also unlikely that the rate rises will be sufficiently high enough to address inflation. Significant interest rate hikes that could slow down inflation would damage stocks and make debtors insolvent, with governments among the first to feel the pressure.

Between a rock and a hard place

Central bankers have therefore adopted inflation as a conscious policy. They embraced inflation-driving policies, including quantitative easing and aggressive rate cuts, to combat the economic disruption caused by Covid-19. Printing money and keeping interest rates low have since become a global habit. This is understandable given that the alternative is a deflationary crash with widespread bankruptcies.

The preferred policy has been to avoid an outright market crash and the resulting insolvency by bringing about a soft default through currency debasement. Savers, fixed-wage earners and pensioners have been sacrificed in the name of debt serviceability and stock market performance.

It’s clearly time to find a new solution to inflation, one that can better protect the interests of savers. The good news is that while insulating entire economies from the pernicious effects of fiat monetary policy is a huge challenge, it’s actually quite easy when it comes to the level of individuals. Bitcoin is immune from the risk of dilution through centrally mandated monetary policy.

While often perceived as an investment or speculation, Bitcoin has all the characteristics of “good” money — it is durable, divisible, portable and verifiable — but with the added advantages over fiat currencies of scarcity and predictable monetary policy. It can also be held securely by individuals. Through Bitcoin, people can ensure that their hard-earned assets are protected over the long term against monetary debasement and inflation. 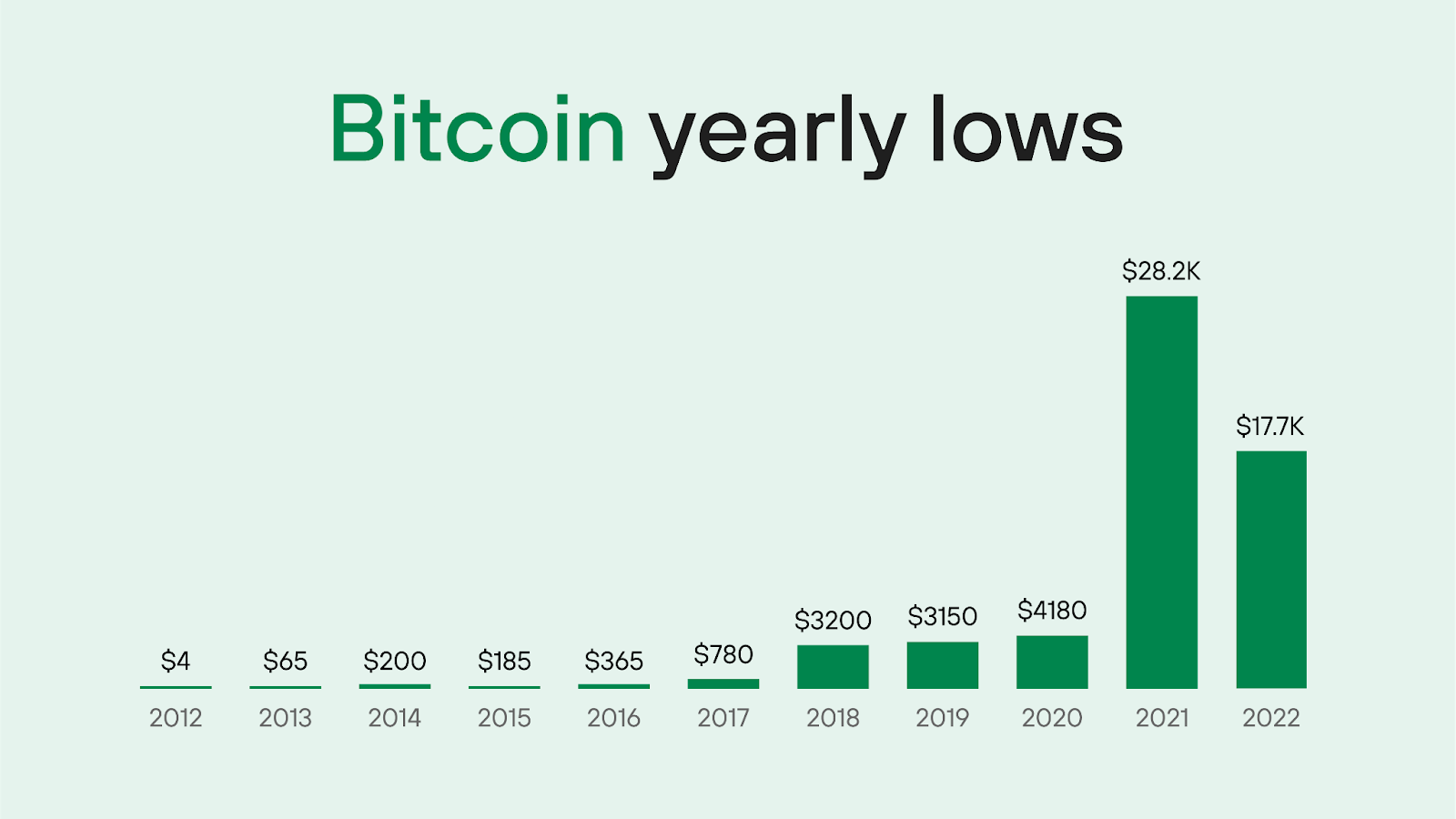 Yearly lows may be a better indicator of long-term value than yearly highs.

But in order to serve this purpose, self-custody of Bitcoin is of paramount importance, given what we’re seeing in the cryptocurrency sector at the moment.

Celsius Network, a crypto lending firm, recently moved to freeze customer withdrawals and transfers, citing “extreme market conditions,” in the latest sign of how quickly negative contagion is traveling through the cryptosphere. This followed a disclosure from Coinbase that customers might not be able to retrieve their cryptocurrency assets in the event of bankruptcy.

Bitcoin held on a centralized exchange like Coinbase or lending platform like Celsius simply isn’t yours; at best, it’s a promise that might be physically settled when you attempt to withdraw your coins. This odd relationship with custody is how these companies have been able to perpetuate growth and, in Celsius’s case, provide yield. When crypto values are rising, people pay little attention to the risks involved, but in a bear market the tables turn very quickly.

The only way to really own your own cryptocurrency is via self custody — cold storage on a hardware wallet. If you don’t hold the private keys in such a way, the situation with Celsius and other centralized exchanges proves that you don’t actually own your crypto either.

A lifeboat for savers

That’s not to say that Bitcoin will deliver nothing but upside for investors. As we are seeing now, Bitcoin can and does experience periods of volatility and bear markets. However, that is to be expected and is part of the process of Bitcoin becoming a global, neutral monetary standard. Indeed, when we factor in that bear markets are a natural occurrence, Bitcoin becomes the conservative investment choice for people looking to make their money grow over the long-term.

In a world where inflation is running unchecked and the ability of central banks to combat it remains questionable, Bitcoin offers a lifeboat for savers. They have a clear choice: between fiat currencies that are continually debased by the very people in charge of running the banking system, or Bitcoin — a democratized monetary good that gives people ultimate control and empowerment of their financial lives. 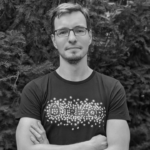 Josef Tětek is a Bitcoin analyst for SatoshiLabs, the creator of Trezor, the original crypto hardware wallet. Based in Prague, Josef is also the author of “Bitcoin: The Separation of Money and State,” published in 2021 in Czech, and a founder of the Czech and Slovak Ludwig von Mises Institute.