→ Forkast.News has a new look – read a letter from the Editor-in-Chief
Published April 19, 2021 Last updated 3 months ago
By Lucas Cacioli

Were the weekend’s falling BTC, ETH and XRP prices a cryptocurrency market crash or just a correction — and why is DOGE escaping investors’ wrath? 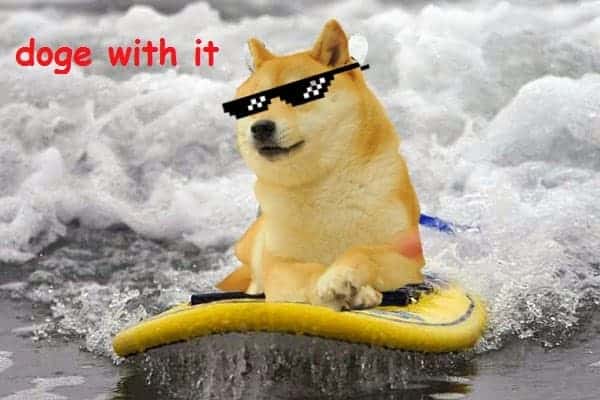 In anticipation of the Coinbase Global Inc. public listing last week, retail investment mania reached a fever pitch, pushing the value of the entire cryptocurrency market above the US$2.25 trillion in market cap. But what goes up must come down, and the weekend saw a heavy correction as traders liquidated their positions for profits and reports circulated of a massive power outage in China’s Bitcoin mining hub.

Bitcoin crashed by over 15% on Sunday — recording the largest correction since February — just days after the flagship cryptocurrency recorded a new all-time high of US$64,869. BTC prices fell to as low as US$53,238.33 but has since recovered slightly to trade at around US$57,000 at the open of the Asian market.

Corrections were felt across the entire cryptocurrency market, with Ethereum’s Ether also falling below US$2,000 before a recovery above the US$2,200 level. The weekend’s sell-off also erased much of the recent price gains made by most of the other top 10 cryptos, including Binance Coin (BNB), Cardano (ADA) and XRP.

The popular meme cryptocurrency Dogecoin was the only top 10 cryptocurrency that escaped the weekend in the green and is now up around 28% in the last 24 hours. Dogecoin, which was worth less than a penny per token at the beginning of the year, is now around US$0.40. The cryptocurrency that started as a joke has vaulted over stablecoin stalwart Tether (USDT) and Cardano (ADA) to become the 5th most popular cryptocurrency in the world, with a market cap of over US$49 billion.

As Coinbase, the largest U.S. exchange, prepared for its Nasdaq debut last Wednesday, crypto trading turned into a frenzy that saw almost every cryptocurrency on the market surge in price, which put the entire market into overbought territory.

On Sunday, most long positions were liquidated on top Asian exchanges, including OKEx, Huobi and Bybit with over US$1 billion in liquidations. Meanwhile, Binance accounted for 49% of the total US$9.26 billion in crypto liquidations

The trading activity was consistent with data from Hong Kong-based AAX exchange, according to its chief operating officer Toya Zhang, who said the weekend’s market correction was all but inevitable given last week’s dramatic price surges.

AAX analysts observed that Bitcoin was able to pump above the US$60,000 resistance, which had been hanging over the market in the weeks prior, as a direct result of the momentum caused by the Coinbase listing.

Coinbase going public has been regarded by some as a potential tipping point for the world of cryptocurrency becoming mainstream. But it was revealed that many of Coinbase’s largest shareholders and investors had sold off around US$5 billion worth of COIN stock on its first day of trading — with CEO Brian Armstrong selling almost $300 million of his own stake. The news reverberated across the cryptocurrency market, with Bitcoin plummeting to the low US$50,000s region.

“The news that Coinbase executives are actually selling their stocks is not really sending a very bullish signal to the market,” Zhang said. “Even though stocks and crypto are two separate things.”

Zhang notes that there are other factors that cannot be neglected, namely the significant decrease in Bitcoin’s hash rate due to the power outage in China’s Xinjiang region — where a significant portion of worldwide Bitcoin mining is done.

“People started to panic a little bit,” Zhang said. “The information on the power outage is everywhere on the internet. So before the impact could be fully interpreted, people started selling off” their Bitcoin.

AAX — which facilitates a lot of trading by users from Hong Kong, Korea, Japan, mainland China and Russia — had a very busy weekend. “Spot markets recorded eight times the trading volume of an average week” Zhang said, adding that activity in the  futures market also increased four-fold, compared to an average week.

“The increase in trader activity is normal during periods of high volatility,” she said.

Will the Crypto markets recover?

While the cryptocurrency price corrections may have rattled some of the newer investors in the market, these types of corrections are not that dramatic in the digital asset world, and AAX data indicates the overall bullish sentiment for Bitcoin and other cryptocurrencies remains high.

“In terms of users, we can tell that they are still bullish, especially at this price and are expecting BTC’s price to recover further.” Zhang said. “In terms of people purchasing Bitcoin, the correction is having a very positive effect on the market.”

As the banks do not operate over the weekend, the AAX exchange has woken to a significant volume of pending fiat transactions for Bitcoin. “People have actually taken cash, wanting to get in and buy Bitcoin and the [fiat deposit] volume today is actually around 1.5 times of our average deposit. So we are seeing increasing numbers of people that see this [correction] as a great opportunity to enter the market again.”

Lucas is a journalist with a background in covering blockchain and crypto. He has been closely following the rising adoption of blockchain across multiple major industries and has interviewed some of the key figures leading its development. Lucas believes blockchain technology will create a more efficient, transparent and connected world, and foster access and inclusion within the global financial system.