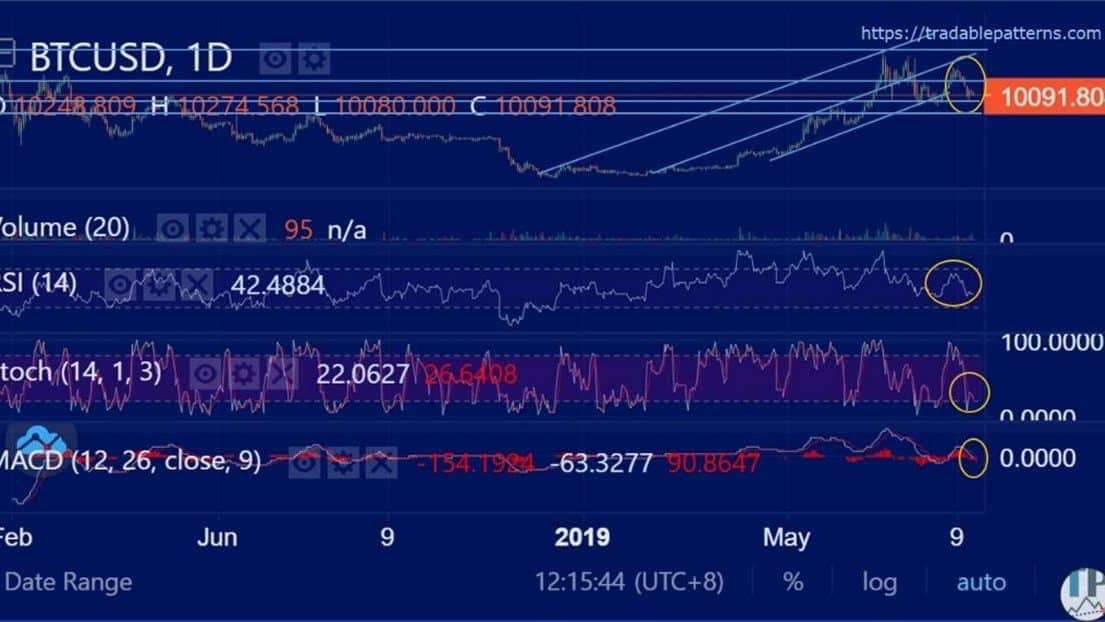 Bitcoin (BTCUSD) has reclaimed the psychologically key 10k whole figure level (as part of its ongoing 2 month consolidation) after some profittaking last week.  While bulls see BTCUSD resuming an upchannel or bull flag (on its weekly and daily chart), they should closely monitor Ripple (XRPUSD) and Ethereum (ETHUSD) in their ability to reclaim (after breaking last week) major prior supports at 0.3 and 200 respectively.  Although the weekly MACD is trying to negatively cross, odds remain high for the weekly MACD generic sell signal being a false one.  BTCUSD’s monthly chart (available off tradingview.com) still suggests that the June-August pullback is merely consolidation within a major uptrend, as opposed to the beginning of a reversal of the uptrend since last December.

BTCUSD bulls are anticipating the third Bitcoin block reward halving (which will reduce the amount of new BTC supply) May 2020 but which has historically (for the 2 other halving events) seen bull runs begin roughly 1 year in advance of the halving date.  The Bitcoin blockchain itself continues to benefit from Lightning Network-related scalability improvements.

Walmart has applied for a patent for its own stablecoin, which will operate within its ecosystem (including that of partners) as a way to incentivize shoppers to pay for purchases through the stablecoins, earning discounts and collecting loyalty rewards.  Like Facebook’s Libra, the Walmart stablecoin will also facilitate low or no fee remittances (helping bring banking to the unbanked), but will allow holders to earn interest (unlike Facebook’s where the interest goes to the Libra Association members).  Slightly different from Libra, the Walmart coin will likely only be backed by the USD.  It will also produce competition to credit cards as shopper credit will be determined through their shopping patterns (as captured by the use of the Walmart coin), and will restrict purchases of certain items normally restricted by age (e.g. cigarettes).  Walmart’s stablecoin could gain greater traction than Libra in its first few years particularly with it getting less regulatory pushback so far and its massive network of 11500 stores across 27 countries, visited each week by 265M customers.

The Facebook Libra stablecoin whitepaper release (targeting a launch the first half of 2020) continued this week to fuel mainstream media coverage, and robust pushback from regulators, central banks and politicians.  Crypto purists are critical of Libra’s centralized nature, which paves the way for censorship and potential abuse of user information.  Problematic for Facebook is that much of the unbanked resides in countries where either Facebook or crypto is currently banned.  Key investors like Visa, Mastercard, Paypal and Uber have injected USD 10M each to become members of the Libra Association and to manage their own node.  The objective is to have 100 investors (from a variety of industries, including telecom, media and e-commerce) with 27 names already on the list.  Banks have passed on the project so far.

Longer term industry bulls are also increasingly buying on dips as the sector overall gains interest from IBM’s use of the Stellar blockchain for its payment network – the World Wire.  Banks will be able to launch stablecoins on World Wire, or to use Stellar Lumens directly as a bridge currency between different fiat currencies.  Ongoing anticipation is building for the coins being developed by other leading messenger apps (i.e. Line, Kakao) and banks (i.e. JP Morgan, Mizuho, Bank of Tokyo-Mitsubishi UFJ).

The demand to trade Bitcoin futures should continue to grow as TP ICAP – the world’s largest interdealer broker – announced in mid June their intent to launch a digital assets desk, with the service limited to Bitcoin futures initially.  Fidelity’s institutional crypto trading offering meanwhile is available (or in testing) for select clients, with retail brokerage giants Etrade and TD Ameritrade also preparing to launch trading in a few top coins.

The market is increasingly shrugging off the fears around Bitfinex covering up losses with funds earmarked for backing Tether (USDT), especially as it has apparently already received commitments for USD 1B in its current raise to offset funds frozen by US, Polish and Portuguese authorities.  With liquidity on USDT significantly higher than newer, competing USD-backed, audited stable coins due not in small part to USDT enjoying first mover advantage and the network effects from having the longest established history, the market appears to be largely sticking with using USDT which is listed on more crypto exchanges and offers superior liquidity.

BAKKT has finally announced an official launch date of Sep 23.  A race continues to launch STO exchanges and consultancies ahead of increasing regulatory clarity on STOs.

WATCH: In Conversation with Emma Cui: Incubating Blockchain Startups Around the World

The Perfect Storm for Bitcoin